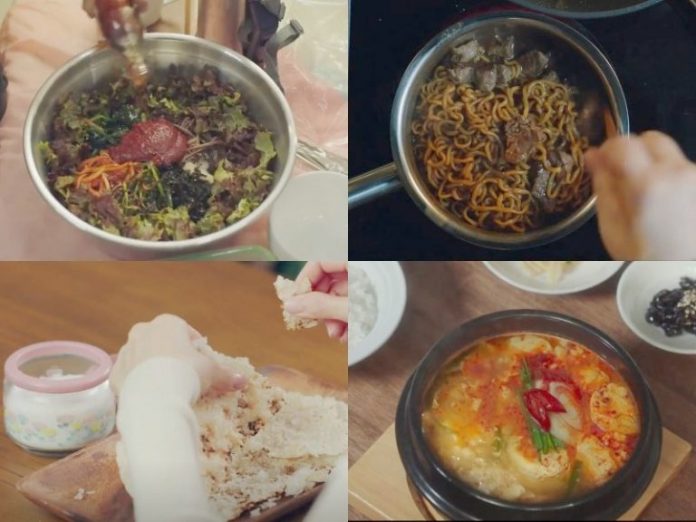 As loyal K-drama fans, we’ve got to admit it’s not just the good-looking cast and interesting plots that keeps us glued to our screen. More often than not, we find ourselves also craving the delicious Korean dishes that pop up from time to time. Case in point: the mouth-watering ram don topped with prime beef sirloin, as featured in Asian fil Parasite. (And yes, we’ve included this recipe in our list — see #3!) If your stomach is growling as you binge-watch your favourite Korean series or movie, it’s time to hit the pause button and whip up some easy K-drama inspired Korean recipes in your kitchen!

1. Crash Landing On You — Nurungji (scorched rice with sugar)

The record-breaking K-drama, Crash Landing On You, may have ended on Netflix but this unforgettable series is still causing a buzz on the internet. The drama follows South Korean heiress Yoon Se Riinto a whirlwind romance after a paragliding mishap landed her across the border. She gets rescued by North Korean army officer Ri Jeong Hyeok, who now must risk his life to keep her safe and sacrifice his larder of ingredients to keep her full!
One of the snacks that Yoon Se-Ri could not stop munching on during her stay across the border is nurungji. Nurungji means scorched rice in Korean and is a great alternative to crackers or chips as it shares the same addictive crunchiness and texture. If you’re craving for a sugary snack, try this easy Korean recipe for nurungji today!

Goblin is one of the most exciting fantasy romance K-dramas we’ve ever seen! It revolves around Ji Eun Tak, a bubbly high schooler with the ability to see ghosts and who becomes more than just friends with an immortal goblin. Eun Tak lives with her grouchy aunt and greedy cousins who never remember her birthday. Nevertheless, our strong female lead throws herself a mini birthday celebration every year with a pot of miyeok guk!
It’s a Korean tradition to have seaweed soup on your birthday. This is because expecting mothers in Korea consume seaweed soup during their pregnancy — which also makes it the babies’ first meal! Koreans consume seaweed soup on their birthdays as a way of giving thanks. Follow this easy miyeok guk Korean recipe below — treat yourself to this heartwarming dish even if it’s not your birthday!

Even though Parasite isn’t technically a Korean drama, there’s no way we could miss out on this Oscar-winning Asian film — especially when it came to sparking a massive ram don craving!  If you have yet to watch it, the psychological thriller depicts the class inequality between the wealthy Park family and the penniless Kim household. The Kims infiltrate the Parks by offering various services for the family — as a tutor, art therapist, driver and housekeeper.
As a housekeeper, mum Kim Chung Sook is tasked to keep the house in order and also to cook for the Park family. One of the most iconic dishes shown in Parasite is jjapaguri with steak, also known as ram don. The dish appears at one of the most heart-stopping moments in the film — will the Parks discover the Kims’ secret?! — and it is perhaps this thrill that adds to its mouth-watering qualities! Either way, this easy Korean recipe is made by mixing two types of instant noodles (Chapagetti and Neoguri) and topped with premium Korean beef.

Whoever said girls are weak and frail surely hasn’t watched Strong Woman Do Bong Soon yet!  Do Bong Soon is here to change this stereotype for females! In this K-drama, Bong Soon possesses superhuman strength despite her petite frame and is employed as a bodyguard for the rich CEO, Ahn Min Hyuk. When Min Hyuk shields Bong Soon and gets stabbed during a gang fight, Bong Soon rushes him to the hospital and cares for him. Her family thanks Min Hyuk for saving Bong Soon by whipping up a huge pot of homemade bibimbap, but our poor male lead was denied the feast because he has yet to fully recover.
Even though Min Hyuk failed to get a bite of the appetising bibimbap, it doesn’t mean you have to hold back too! Recreate the Do family’s inviting dish with this easy Korean bibimbap recipe — it’s perfect for meal prep too!

Park Seo Joon is back at it again with another hit asian Netflix drama, Itaewon Class! This time, he acts as Sae Ro Yi, an ex-convict who’s determined to make his bar-restaurant in Itaewon (duh!) a success while he avenges his father’s death. This action-packed drama is filled with many twists and turns but food is a key element in this show. One dish that stands out: Danbam’s (Sae Ro Yi’s bar) award-winning signature Soft Tofu Stew. It goes well with rice and the recipe can even be tweaked to suit vegans (eliminate pork, garlic and egg)!

How often do you find a drama that revolves around the lives of female weightlighters? Weightlifting Fairy: Kim Bok Joo is an unconventional K-drama following Kim Bok Joo, a college female weightlighter who isn’t popular among the guys because of her masculine energy. However, a fateful incident leads her to Jung Joon Hyung, a free-spirited college swimmer who takes a liking to Bok Joo’s candidness.
As someone who eats a lot to keep up with her sport, Bok Joo can be seen gulping down an assortment of yummy food in various episodes. Needless to say, she’s also a huge fan of Korean street food, which includes tteoboki and of course — odeng! Try out this easy Korean fish cake soup recipe, which Bok Joo extorts from Joon Hyung after he cancels on their movie date!

Although the ship is no longer sailing for our beloved Song-Song couple, Descendants Of The Sun is still undeniably one of the most popular K-dramas of the decade. Song Joong Ki stars as the charming Yoo Si Jin, a captain of the South Korean Special Forces unit. He falls for the kind hearted Dr. Kang Mo Yeon (played by Song Hye Kyo) but fails to give time to the relationship due to his irregular work hours. However, the couple finds themselves both deployed on a peacekeeping mission in Uruk — the perfect opportunity to deepen their relationship!
During their stay in Uruk, Yoo Si Jin and his best pal, Sergeant Major Seo Dae Young tried to impress their respective love interests by cooking samgyetang! Samgyetang translates to ginseng chicken soup. While this invigorating Korean dish was a hit among the two female leads in the drama, it also became a worldwide sensation when fans of the series rushed to South Korea for an authentic taste of samgyetang! You can now enjoy all the health benefits of samgyetang with this easy Korean recipe.

One of the most magical dramas of the 20th century, Hotel Del Luna features a supernatural hotel that serves ghosts! With Korea’s sweetheart IU playing Jang Man-wol, follow her adventures with her hotel manager, Gu Chan-sung (played by Yeo Jin-goo). Due to a sin she committed, Man-wol’s soul has been tied down to taking care of the hotel and its guests for years. Though she might look just a bit over 20, her actual age is over 1000 years old! One important aspect of their relationship is the need to feast on the best foods, which includes this classic yet satisfying dish of tteokguk.
This traditional Korean dish is commonly enjoyed on New Year’s Day, and is believed to grant you good luck for the whole year. Plus, eating one bowl of tteokguk is said to symbolise the gaining of one year of age. Thus it’s no surprise that Chan-sung raises a deal to eat as many rice cakes as possible to match Man-wol’s age of over a millennium years old just so he can speak to her casually. Try this fuss-free recipe out if you’re ready to welcome a year of good luck, or even figuratively grow a year older in an instant.

OR you could get a pre-ready beef stock or beef stock seasoning powder to cut your cooking time by half!
Main & Soup Sauce

Toppings (optional, based on your personal preferences)

Recipe Instructions:
For making beef stock from scratch (otherwise, skip to 3):
1. Put the water, black peppers, onion and green onion into a large pot and boil on medium-high heat with a lid on. Once the water starts to boil, add the meat. Boil them on medium-high heat for a further 5 mins then reduce the heat to medium. Boil them further for about 50 mins.
2. Sieve the stock through a Cheese Cloth (available on jiamy1.sg). Discard the vegetables but keep the stock and the meat. Cool the meat down for about 10 minutes then shred the meat using a knife or hands. Season the meat with salt and sesame oil and set aside to cool.
3. Soak the Rice Cakes (available on Sol Mart) in cold water for 15 to 20 minutes to soften it.
4. While waiting for the rice cakes, prepare the Eggs (available on GrocerKing Official Store) for your topping. Separate the egg white and the yolk. Pan fry them separately at a low temperature with a little oil. Thinly slice them and set them aside.
5. Drain the water from the rice cakes
6. Boil the stock in a pot on medium-high heat and bring it to a boil. Once it is boiling, add the minced garlic, soy sauce and rice cakes. Cook the rice cakes for 2-3 minutes till they are softened but be careful not to overcook them as they can turn mushy
7. Serve the soup in a bowl and garnish with toppings! 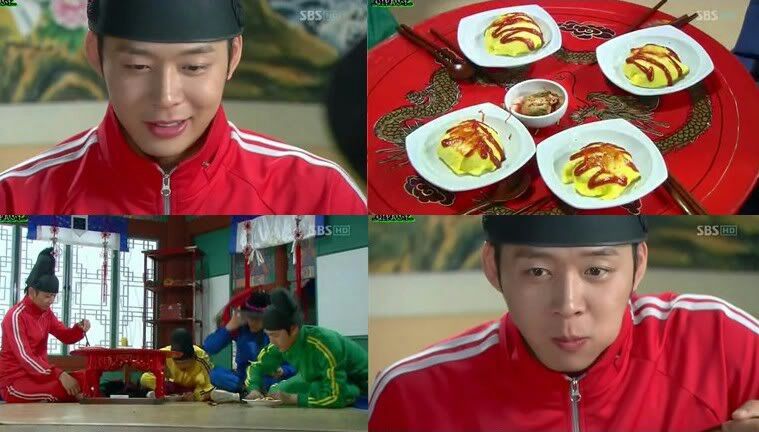 A classic K-Drama that won the war for Best Korean Drama in the year it was released, Rooftop Prince is a drama that combines romance, comedy and the fantasy of time travel into one exciting show. With four men from the Joseon era appearing in modern times, they were extremely fascinated when they were served the dish of Omurice! Omurice is known as a modern fusion of western and Asian cuisine that is surprisingly popular in Korea. Indulge in the tangy flavours of this dish that is incredibly easy to whip up!

We hope you had fun making these easy Korean recipes! If you have no time to recreate recipes like bibimbap, samgyetang or nurungji, we suggest you give these quick and simple air fryer recipes a try! More into baking? Check out our Mother’s Day cake recipes which can be easily altered to suit any occasion. Don’t leave your little ones out of all the kitchen fun! Get them involved with these kids-friendly baking recipes this stay home period.

9 Easy Recipes To Try With This Bear Electric Lunch Box

10 Best Dim Sum Buffets To Get Your Yum Cha Fix

Live The High Life With These Best Sunday Brunches

916 To 999: The Complete Guide To Buying Gold Jewellery

9 Easy Recipes To Try With This Bear Electric Lunch Box

17 Hotel Staycations In Singapore According To Your Budget

8 Must-Haves From $2.26 To Get Your Home Ready This Hari Raya

Top 7 Meat Delivery Vendors In Singapore Who Will More Than...