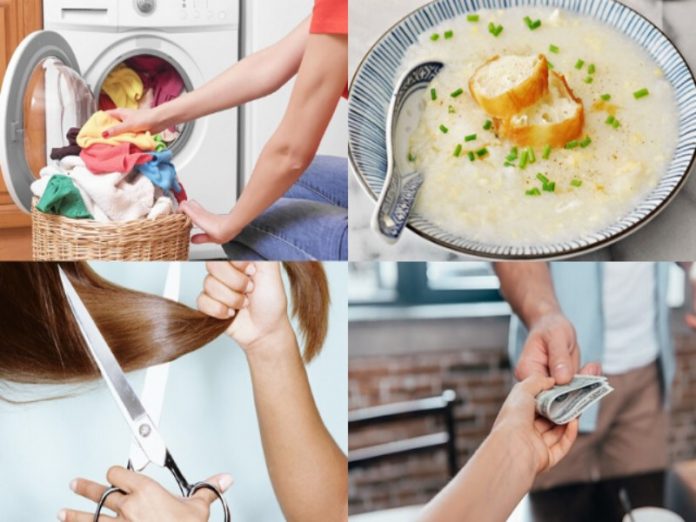 Chinese New Year is here, along with a lot of superstitions that Chinese people believe in and abide by just because better be safe than sorry right? No one wants a year of bad luck ahead when it could be avoided. So in case, you don’t know, here are some Chinese New Year taboos that you should take note of during the festive season for a good year ahead, and also steer clear of offending people when you visit their house.

The Chinese people believe that sweeping the floor during Chinese New Year means you are sweeping your wealth away. So in case you want to get rid of your luck before the year even officially starts, don’t clean the house at all costs. This is such a good excuse to avoid doing housework.

The use of sharp objects like knives, scissors and needles should be avoided during the Chinese New Year as they can lead to accidents and this is deemed as inauspicious and unlucky. They are also an omen for possible quarrels with others because a sharp object insinuates that you want to cut off your relationship, so don’t use them if you want to go through the year peacefully!

Never break any glass, ceramic objects or mirrors during Chinese New Year, because breaking may result in money loss and family disagreements in future. In the scenario that a glass shatters accidentally, wrap the pieces in a red cloth, and while picking them up say out loud “Sui Sui Ping An”, which means to be safe and sound every year. The pronunciation for the chinese character shatter (碎 Sui) and year (岁 Sui) sounds the same, so the Chinese people believe that this will overwrite and expel all the bad luck.

4. Don’t owe over the new year

Do not lend or borrow during the lunar new year, especially money. The belief is that lending money equates to economical loss, so you should avoid offending friends or neighbours by borrowing things from them. You should also settle your debts before the year starts, as it is an unlucky omen to owe people money over the new year.

5. Don’t give a watch or clock as a gift

In chinese, the phrase “giving clock” directly translates to “送钟 (song zhong)”, which sounds exactly like the Chinese words for “attending a funeral ritual (送终 song zhong)”, and thus gifting a clock as a present would seem like you are cursing the recipient. On top of that, clocks and watches symbolise the running out of time, hence if you give them as presents it would seem like you are cursing the recipients to go early. Clocks and watches as gifts are the biggest no-no in Chinese culture!

Washing or cutting your hair during Chinese New Year is a big no as the superstition believes that you will wash or cut away your luck. So make sure you wash up before the clock strikes 12 or you will have to bear greasy hair for the next 3 days at least!

Likewise, washing laundry has the same connotations as washing your hair, so avoid doing the laundry to prevent all the luck from leaving you!

9. Don’t give an odd number amount in the angpao

The taboos mentioned above may seem familiar if you celebrate Chinese New Year as they are commonly reiterated superstitions, but you might not know about those below.  Here are some of the less talked about taboos:

10. Don’t give blessings to someone in bed

While you are supposed to give New Year blessings during this festive season, wait for the recipient to get up from bed first before wishing them. Otherwise, they will be bed-ridden for the rest of the year! It is also believed that you should not rush someone into waking up because you don’t want them to be bossed around for the whole year.

Avoid eating porridge during Chinese New Year as porridge is often considered as “poor people food”, and you don’t want to start the year “poor” as it is a bad omen. Buddhists also believe that you shouldn’t eat meat during this festive season as it encourages the killing of animals, which should be avoided as this is a happy occasion, and everyone should be out celebrating and giving their well-wishes.

12. Don’t have an empty rice barrel

The rice barrel is an indication of one’s living standards. If it is empty, this would mean that there may be days of starvation waiting for them in the future. Hence, Chinese families believe that filling the rice jar to the brim during Chinese New Year’s eve is a way to welcome a healthy financial situation.

13. Do not visit the wife’s family

When a bride marries, she moves into the groom’s home. In Chinese traditions, they believe that if the bride returns back to her family on New Year’s Day, it would signify that there are marital problems, and this may bring bad luck to the family. The couple can visit the wife’s family on the second day of Chinese New Year instead.

Whether you are superstitious or not, you’d rather be extra careful or potentially face a bad year ahead! Which taboos are you going to follow? Let us know in the comments below! And now that you are equipped with the right information on things to be careful of during the new year, you are ready to learn some Chinese New Year greetings to impress your older relatives!

Channel Back To School Cool With These Student Laptops

Enjoy Spin Classes At Home With These Exercise Bikes

Quiz: Which Singapore National Day Song Are You?