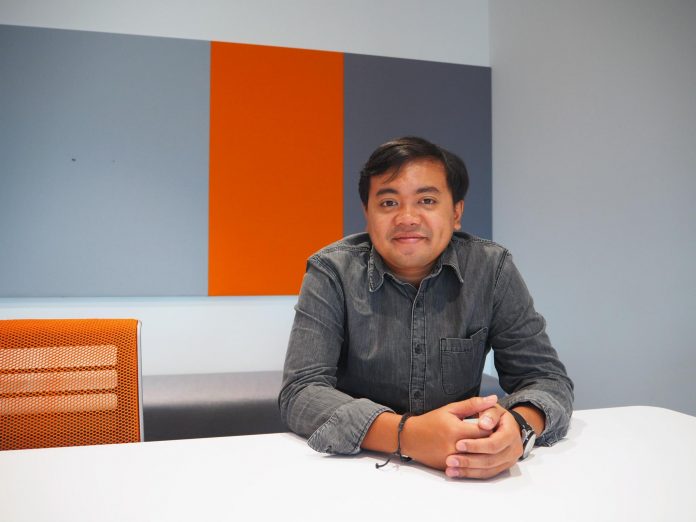 Black bomber jacket, high-end earphones, and sideswept hair – Roozi exudes an old-school biker vibe that belied his charming, eloquent personality. He speaks with maturity beyond his years, and takes me on a journey halfway across the world with his stories, before offering insightful takes on the unsung merits of local culture from a traveler’s perspective.

Roozi is a Quality Assurance (QA) Specialist who ensures that users get to experience a flawless, seamless Shopee interface. When he’s not spotting and rectifying server issues before anyone else does or building frameworks to automate testing and analysis, he’s out looking for the best speakeasies in the city, or checking another country off his travel list.

Here’s what went down during the hour-long conversation I had with the one-man globetrotter.

Perry: Hi Roozi! Tell us a little more about yourself, and what you do here at Shopee?

Roozi: Hey guys, I’m Roozi. I’ve been working with Shopee SG for about 3 months, and I’m currently part of the QA team in charge of Shopee’s core server. I was born in Surabaya, Indonesia. I lived in various parts of Malaysia whilst doing my undergraduate studies, before making my way here to Singapore.

P: What brought you to this side of the region?

R: I’ve wanted to uncover the secrets hidden in this little island since I left Indonesia! It’s such a vibrant city despite its size, which is a stark difference from the places I lived in during my university days. I studied in University of Malaya for 3.5 years, and snagged an internship at Intel further up north in Penang for 6 months. KL was next – I got a full-time job at Quintiq and stayed there for a year.

Malaysia’s a very quaint, cosy place with plenty of chill spots, but I wanted to experience something a little more exciting. Therefore, I started traveling right away in my first year and never looked back since.

P: Four and a half years of being stuck in the same country must’ve been quite a drag for you then! Where have your travels taken you?

R: Oh, plenty of places. I’ve been to almost every nation in the Southeast Asian region, and I’ve covered a fair bit of Europe as well. During my time there, I crossed Romania, France, and Germany off my list. I’ve also been to Korea and the Middle East.

P: Romania’s not usually the first thing that comes to mind when people mention Europe – why the decision to go there?

R: It’s a country less travelled, but it has one of the richest cultures in the continent. I first learned about it as a member in my university’s AIESEC programme. AIESEC is a global youth-run NGO that gives youth the chance to volunteer or work in places outside the comfort zones of most. It was a leap of faith for me as well, but I’m glad I did it!

P: That sounds incredible. Where did AIESEC send you?

R: I managed Muzeul Astra, one of the largest open-air museums in Central Europe. Found in Transylvania, Romania, the museum showcases artifacts from several different cultures and concepts in thematic huts and houses scattered around the museum grounds, making for a experience that’s very different from the usual indoor museums we typically see in this region. Travelling and working alone in a foreign land were two things I had never done before at that point. That could’ve been why the opportunity was irresistible.

R: Yes! Everything about Transylvania and Count Dracula is true –  except the part where he was a vampire. The real story’s a little too graphic for easy reading, so I’ll leave that out! (laughs)

P: Guess I’ll find out more about that on my own! I’ve heard how Romania’s not quite developed – were there any difficulties you encountered along the way?

R: What you’ve heard is true. Romania doesn’t have access to rest of the world the same way Singapore does, so most residents speak the Romanian language exclusively. Network coverage in Romania was also bad in many places, which restricted my Google Translate use on the go. I often had to resort to gestures to make my way around most of the time. That’s particularly difficult when you want something specific, or are trying to inform them of dietary needs. Or cravings!

P: Sounds like the trip involved many personal challenges. Any other memory of Romania that excites you till this day?

R: There’re too many to recount. The first one that comes to mind is the treacherous climb through the rocky mountains, along the famous Transfagarasan road. Look it up, and you’ll be surprised at how many times you’ve seen it without knowing its name! (laughs) It was quite the experience for me as most mountain ranges in Southeast Asia are forested. Being able to see the peak while trekking up the mountain added quite the rush to the entire journey!

Most of the new stuff I’d gotten the chance to experience is situated outside the beaten path, and based on my experience, the road less travelled is always more beautiful and of course more challenging.

P: It takes an adventurous spirit to say that. You have photos to prove your appetite for adrenaline too!

R: (laughs) My friends often comment that my travel paths differ greatly from those listed on most travel guides, and I think it has something to do with how I travel. When I decide to pack up and go, it’s usually very impromptu – I’ll have my flight tickets, but nothing else. I have to plan for accommodations and meals only after touching down, and that has forced me to interact with locals, who usually turn out to be much nicer than most people expect! It’s also helped me save money in some instances – I’ve stayed in a S$2/night backpacker hostel in Cambodia before!

P: Travelling extensively must have been rather difficult to budget. How did you manage?

R: I’ve always believed that the cost of travelling is secondary to the memories gained during a trip. That being said, I tried to save as much as I can while I was studying. Cutting down on material pleasures, like switching to a new phone every couple of years instead of months, helps a lot, as does being frugal in general.

I also try to make sure that I travel entirely for myself. If a particular landmark appeals to the masses but not to me, I tend to skip it, and save quite a bit in the process. This is your holiday – do what you enjoy!

P: It’s rare to see someone this self-assured at such a young age. Was there ever a time where affirmation by others was a priority?

R: Did you ever have a phase where you would wear shoes to the beach just to look good? I was like that once as well! (laughs) We’d do things just to impress, with little regard for what was most important – our own personal welfare. I think solo travelling has taught me to focus on what’s important, which becomes very obvious when you’re in trouble in a foreign land.

The concept of ‘coolness’ is relative, and I’ve learned from experience that being yourself always pays off better in the long run. Being yourself brings truly like-minded people to you, and that’s when you will truly enjoy yourself. A facade merely attracts people who don’t appreciate you for who you truly are, and you’ll get tired out keeping up with trends or matters you don’t even enjoy.

P: Letting go of excess baggage is something we all could learn! Conversely, has there been things or people you’ve learned to appreciate more after all your travels?

R: Family, for sure. When you grow up around them, you eventually take them for granted. I was always adventurous and wanted to leave Indonesia for greener pastures, but after two years of Hari Raya celebrations away from home for summer programs in other countries, I found myself missing them the most.

I can’t wait to finally be home again to see my sister and the rest of my family! One’s mind may wander, but home is really where the heart is.

P: How has Shopee complemented your burning sense of adventure?

R: Shopee’s been a fresh breath of air compared to other firms I’ve worked at. I’ve interned and worked full-time for MNCs and met many helpful and talented people, but the pace was always a little slow. Here at Shopee, I’ve been asked to step out of my comfort zone. Seeing how my hard work makes a real difference makes the discomfort worth everything. The fun and open community here turns every workday into an experience as well!

P: (laughs) You’re an adrenaline junkie to the core! You mentioned having a sister. Come the day where she tells you she wishes to follow in your footsteps and work outside of Indonesia, what advice would you give her?

R: Three words: just do it! (laughs) It’s the figurative deep end of one’s personal journey: getting a job, moving to a new place, and adapting to a new environment. Don’t be overly concerned with naysayers who speak of the horrors of working overseas – there will be problems, but those can be solved.

A friend once said something that really struck me: “Everything is going to be alright. If it’s not, it’s not the end!” Wandering into the great beyond will always come with its own trials and tribulations, but getting through them will only make you a stronger, more adaptable, and more appreciative person. Taking that big step out has been great for me so far – so to my sister or anyone who wishes to take the plunge, I’m confident it will be for you too!

Your adventures have made our day, Roozi! Have you been bitten by the travel bug, or simply by Roozi’s exciting travel stories? Satiate your wanderlust with another global adventure by a fellow Shopee warrior, or join these globetrotting individuals at work and hear their stories firsthand!

Straight from the runway: 6 lewks spotted at Shopee Indonesia!