Shopee Blog | Shopee Singapore
Home Life at Shopee Kaleidoscopes of Kelvin: A DevOps Engineer on Hikes, Hobbies and the Hustle 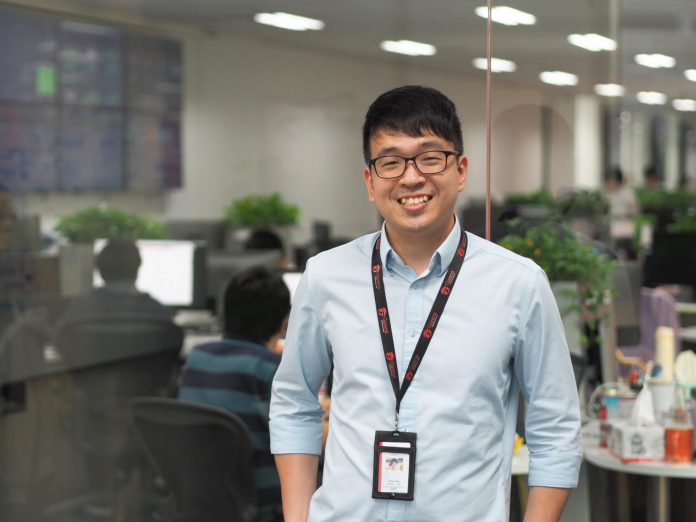 I show up in the office on a Tuesday morning, and bump into Kelvin gesturing animatedly with a colleague, helping him add the finishing touches to a presentation due in the afternoon. I bump into him again whilst grabbing a snack from the pantry – he’s reciting jargon like poetry as he gazes into a screen filled with code. By the time he appears in the meeting room for our interview, he’s slightly frazzled, but no less excited as he launches into a story about how his team was bracing itself for the pre-10.10 bustle.

Kelvin is a Software Engineer in Shopee’s Platform Engineering Group, and is in charge of building and maintaining the foundational code that supports the site’s functionality. Despite his hectic schedule, he’s always ready to lend a hand or share a story. He does so here with gusto, effortlessly punctuating the conversation with his otherworldly anecdotes and boyish laughter, blending the spectacular colour of his experiences an approachable hue.

P: Working the whole week through can’t be easy – thank you to you and your team for making such a large-scale event possible!

K: You’re welcome! I did sign up for this, actually! (laughs) I still remember being asked by my interviewers to choose between a Technical Operations or a Developmental Operations (DevOps) role. I wasn’t too sure but wanted to push myself, so I told them to sign me up for what they needed the most at that point of time. Eventually, I was hired as a predominantly Developmental software engineer, but they counted on me to perform technical roles as well during my early days. It’s been more than a year of juggling both Technical and Developmental Operations tasks, but it’s been incredibly fulfilling as well!

P: It takes a great deal of passion to come out of a double role this happy! What’s your secret to loving what you do?

K: There’s really no secret – I just like to create stuff! I like to think of DevOps as a force-multiplier – our frameworks and tools give other functions the stability and space to write new and improved features for the platform, which directly improves their productivity. It’s a role I enjoy very much – quite unlike my previous positions, which never provided as great a fit as this one. In looking for greener pastures, I stumbled upon this vast orange one I’m working at today! (laughs)

P: Glad to see that Shopee’s been this beautiful for you! What do you think made Shopee a better place to work in – to the point where you’ve stayed for a year and counting in spite of the stress that comes with the job?

K: Hmm, one major reason has to be the culture. Back when I was a fresh grad, I heard many corporate horror stories – office politics, two-faced colleagues, and tyrannical bosses orchestrating a hellscape from 9 to 5 every weekday. Needless to say, I was rather hesitant with entering the workforce after graduating, but Shopee’s proven all these negative stereotypes about the work life wrong.

In Shopee, people are always talking, but only to help teammates with work or to share insights on how they’ve solved particularly challenging problems today. Politics, in my team, at least, is virtually unheard of – it’s amazing how everyone just gets along with each other! A lot of it boils down to management, I suppose – our team leader’s a very impartial person, and that carries over to his decision-making. I suppose it helps that we all have similar temperaments and a compatible sense of humour too!

P: Being part of a team with such a strong collective mindset must have its perks – do you guys have a lot fun outside of work as well?

K: Yes, we do! We’re not exactly the physical type, so the only sports we really partake in is eSports! (laughs) Most people in the team are big on Arena of Valor – it’s a Multiplayer Online Battle Arena (MOBA) game similar to DOTA 2 and League of Legends. I personally prefer Counter-Strike: Global Offensive (CS:GO) – I spend my free evenings working on my skills with a fellow enthusiast in the team.

That being said, my team is always game for adventure when the time calls for it. I’ve trekked some pretty dangerous mountains in Indonesia with one of them, and we’re always ready for a friendly interdepartmental challenge! (winks)

K: Yes – we learned that the hard way soon after we started climbing! (laughs) One mountain that we attempted to hike was called Mount Semeru. It’s a dormant volcano that happens to be the highest point of Java, Indonesia. My friend and I attempted the climb with no prior physical conditioning – a ridiculous idea in hindsight.

The climb itself took about three and a half days. There were extended periods of 35° slopes we had to climb up, which was made harder because of the consistency of the ground. Most of what we were stepping on was volcanic ash, which meant that our feet sank whenever we took a new step. Add the fact that we had less than five hours of sleep per day, and you’d end up with easily the biggest physical challenge I’d faced in my life so far. I’m glad we made it though – the view from the top was spectacular!

P: The hardest-earned victories are the sweetest indeed! When did the passion for hiking first come to be?

K: Oh, that’s another long story! I first decided to head to Mount Semeru to get some photography done. The journey was so tough that the camera stayed in my backpack most of the time, but we managed to get better photos atop other peaks!

Photography has always been close to my heart. It wasn’t the most affordable hobby back then, and being a student meant that I had to scrimp on many essentials. It got to the point where I was making attachments from scratch, like DIY flash diffusers, so I could try out certain photographs for cheap. I even had a makeshift photography studio at home!

P: A whole studio? I guess studio photography must be your thing then?

K: Nope, that was for a blogshop I was trying to kick off back in university! (laughs) That didn’t go so well, but I’d gladly take another crack at starting a personal business in the near future!

I actually prefer other kinds of photography – architecture, landscapes, and street photography are my personal favourites. Oh, I also enjoy observing insects and other creepy-crawlies alike – usually while taking photos, but sometimes away from shoots as well!

P: Most people tend to stay away from bugs! (laughs) What’s the reason behind this interest?

K: I admit it’s a strange hobby – some of my colleagues have taken to calling me Ant-Man! (laughs) For me, it’s just a case of putting myself in their perspective. People usually shun insects or get jitters every time they’re nearby, but I try to put myself in their shoes – they have their work to do, their places to be, and their stories to tell if you’re observant enough! Fun fact: Did you know ants rub their feelers the way hamsters clean themselves?

Part of this attraction also stems from that element of danger involved in getting to these creatures. They usually thrive in deep forested areas off the beaten path, which makes getting to them much harder – and much more satisfying! Aside from rare insects and spiders, I’ve stumbled upon some pretty venomous snakes as well, but thankfully they haven’t paid me as much attention as I have to them! (laughs)

P: That’s a very understanding way of living life – I might never fully relate it to insects though! Pastimes aside, what would be a piece of advice you’d like to offer a budding software engineer who’s looking to follow in your professional footsteps?

K: Well, I usually advocate asking yourself what you really want, then going for it – but that’s not realistic, considering how our tastes and preferences change on a whim nowadays! (laughs)

To anyone looking to pursue a career in DevOps, my first piece of advice would be to take every opportunity to learn. No matter how dry a particular college module may be, there’s every chance that you’ll have to use them somehow in the future. Take statistics, for example – I was never a fan of it in university, but now I use the skills I’ve learned from that module everyday! (laughs)

Another piece of advice I’d like to give is similar to what I do with insects – always attempt to understand the rationale behind someone’s theory or research. Being able to fully immerse yourself in a visionary’s thought process has helped me wrap my head around concepts that were previously alien to me, and I hope it helps all of you too!

Thank you Kelvin for opening up to us, and opening our hearts in the process! If you’d like to make a difference with Kelvin or another one of our friendly developers, check out our openings here, and read more about our other developers here and here. We’d love to have you on one of our teams soon!