Shopee Blog | Shopee Singapore
Home Life at Shopee Of Goals and Growth: A Front-End Developer on Friendships, Football and Flying... 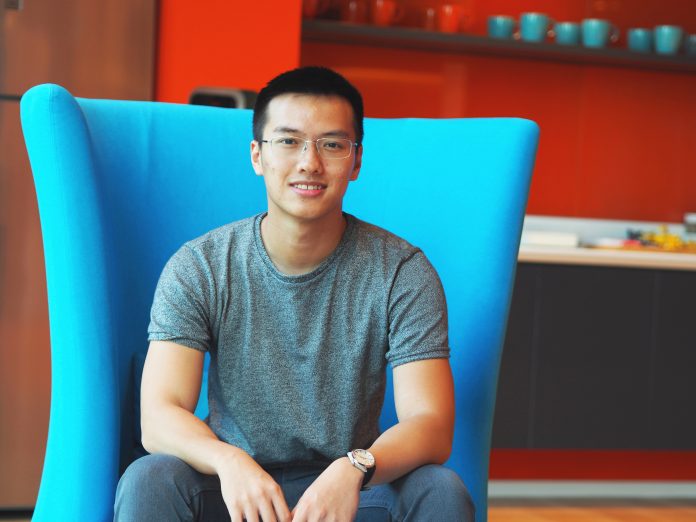 Minh Pham Tuong channels high-school dreamboat: a youthful frame, complete with a million-dollar smile, perched on solid shoulders and an exceptional eloquence. His poise and ease foreshadows the stories of his growth, kicked off from when his first stepped out of Vietnam into Singapore’s education and economy. Minh is a Front-End Developer in Shopee, in charge of making the website the smooth machine it is today. A graduate of NTU’s Computer Science programme, he’s spent two of four years in the workforce in Shopee. Read on as he chats about his team’s growth like a proud father, his passions for sport, and why he believes studying in Singapore was the best decision he’s made. [caption id="attachment_19987" align="alignnone" width="1024"] 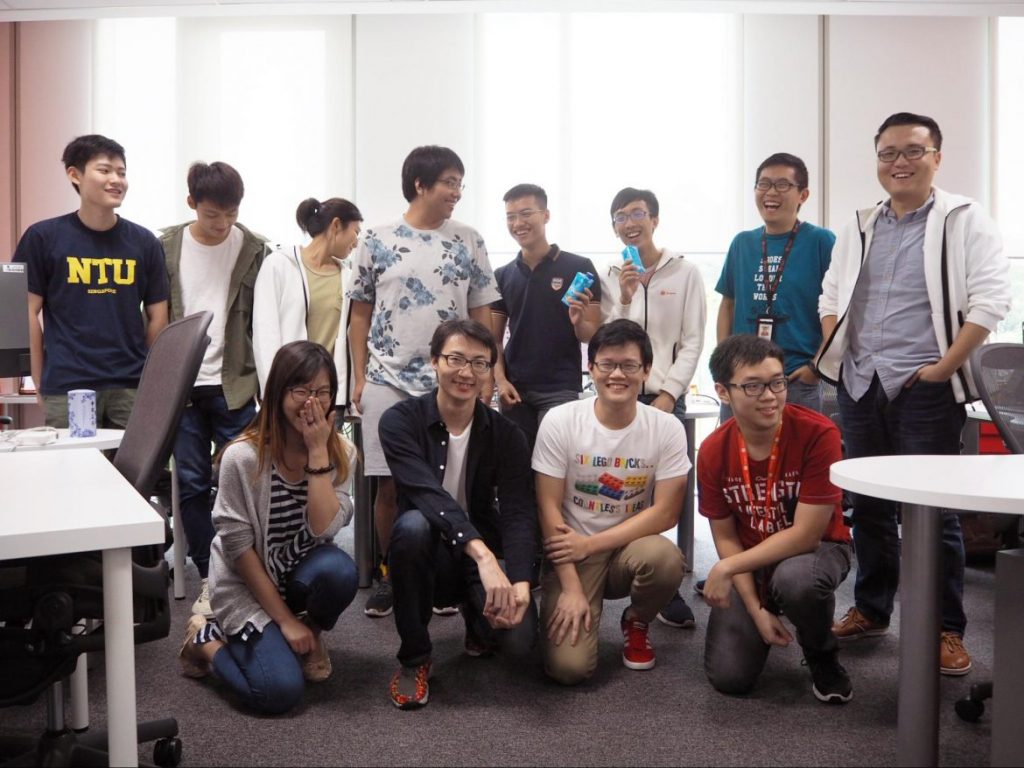 Minh shares a photo and a quick laugh with the Front End Developer team[/caption] Perry: Hello Minh! Tell us a little more about yourself. Minh: Hi Perry! I work on the Front-End Development team, which means my work involves the part of Shopee’s website that customers see. I was one of the first few members on this, beginning with only two other team members. We’re 11 strong today after two years – I suppose we can finally call it a team! (laughs) [caption id="attachment_19986" align="alignnone" width="1024"] 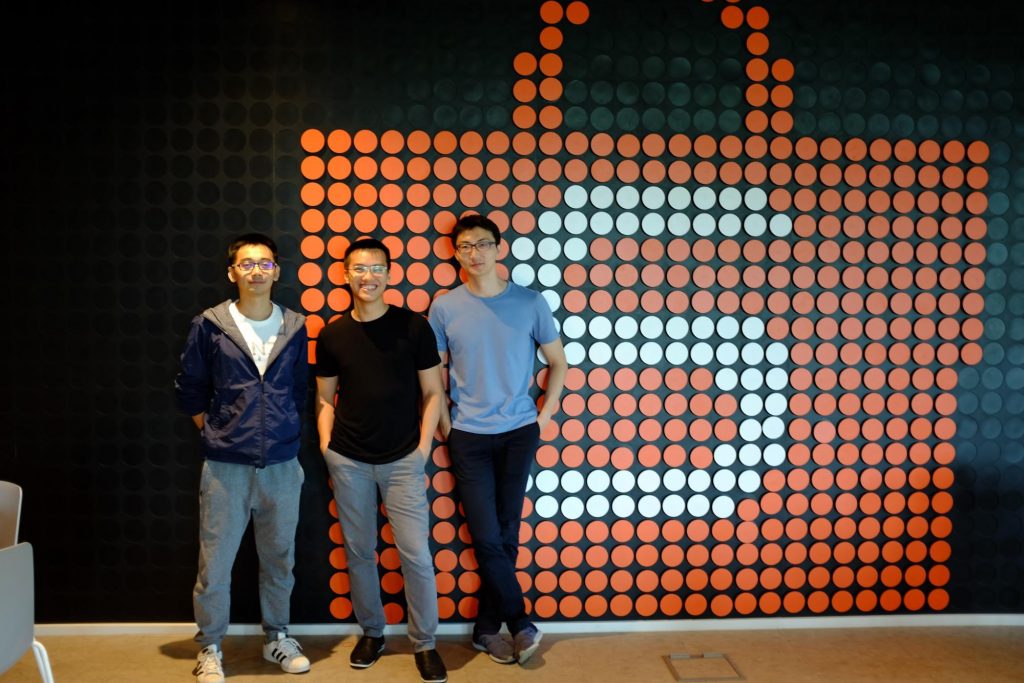 Minh with the original crew of three, building the Front End aspect of Shopee from the ground up[/caption] P: Building the team from ground up must have been a really fulfilling experience! M: It’s been a wild ride, and I’ve learned a lot from it as well. A lot of our growth is attributed to just how fast-paced Shopee is – we’re constantly working to push out new functions, with week-long targets giving us something new to look forward to at the turn of every work week. [caption id="attachment_19990" align="alignnone" width="960"]

Minh’s team is constantly growing, both in size and in spirit[/caption] P: A group with this many additions stands every chance of drifting apart, or worse, disengaging completely. Was this ever a problem? M: Strangely, no! There was very little off-work interaction between the three original members of the team, mostly because we already saw each other so much at work! (laughs) When more team members started to join us, we started to see more personalities, which added plenty of depth to our work environment. We began to bond beyond our professional affiliations, and the mood in the group just kept getting better from there. Even with variety, every team needs a glue to keep everything together. Sport was our glue – all of our members are actively involved in a sport of some sort. We have Muay Thai exponents, board game experts, and rock climbers – a sport virtually unheard of in Vietnam! [caption id="attachment_19989" align="alignnone" width="1024"] 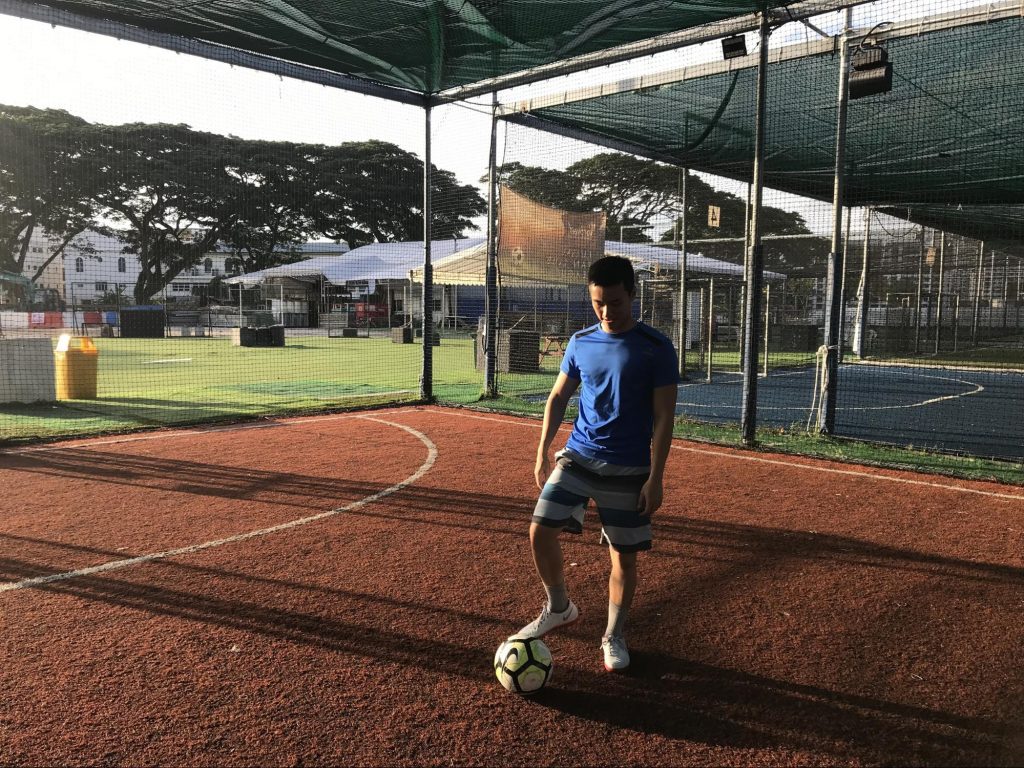 Minh lines up a shot during a game of cage football[/caption] P: Sports really do bring people together! What’s your go-to sport then? M: Mine is football, for sure! I’m usually on the pitch with my college friends every couple of Saturdays, or going for weekday night games with the other football fanatics here at Shopee. [caption id="attachment_19984" align="alignnone" width="1024"] After a productive week’s work, Minh unwinds with his NTU friends with the very activity that brought them together[/caption] P: Oh my, I’m a football fan as well! When did your passion ignite for the first time? M: Are you! Well, I grew up watching English Premier League games, so football’s always been close to my heart. I only started to get into the game myself in university, when I was staying in NTU and there were futsal courts conveniently located around my dormitory. Back then, it was really just a bunch of guys kicking a ball around – it was so chaotic! The games were a much-needed refuge from the hustle in university – having a common activity to live for and laugh about made the transition from living with family in Hanoi to bunking alone in Singapore much easier, and it created a community of Vietnamese exchange students that quickly became a support system we could all rely on. After we graduated and started working, we kept the hobby going on Saturdays. I’m proud of say that we’ve all gotten better at the game since our first times back in the school courts! (laughs) P: I have to ask – which team do you support? M: I’m a big fan of Barcelona. Their style of football is unparalleled! I watch them partially also because of Lionel Messi, whom I think is the greatest footballer of all time. He’s not just easy on the eye while playing in his natural striking position – he’s also a provider, feeding balls in for other teammates to score as well. His style of play is therefore very ageless – he could be 40, and he’d be able to make miracles on the pitch the same way he does today! P: It’s interesting that you’d bring up a team that plays in Spain, given that you’ve only watched English football back home! M: Vietnam used to only broadcast (English) Premier League matches, so my options were pretty limited till I came to Singapore. The other leagues are now more accessible, which means more viewing pleasure for me! (laughs) [caption id="attachment_19985" align="alignnone" width="960"] 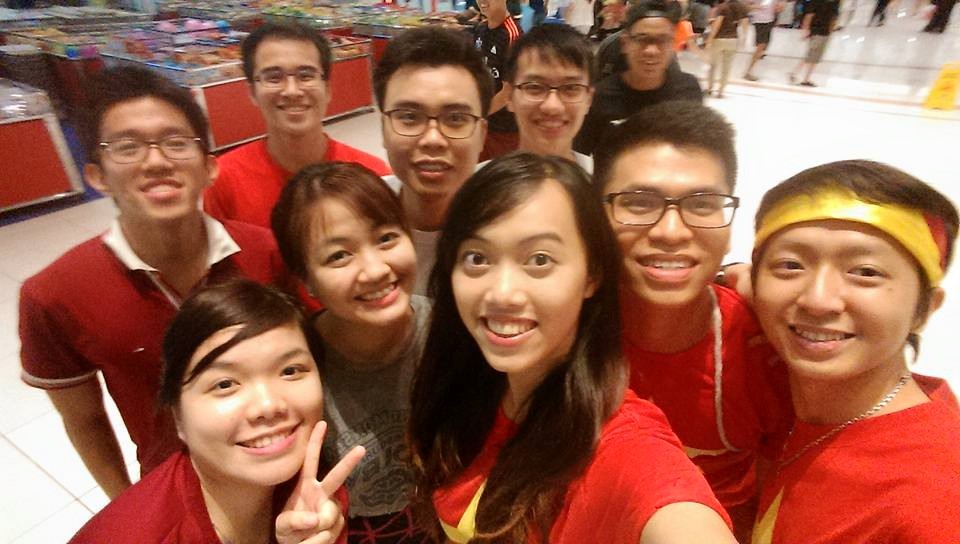 Minh and his friends show up in a sea of red to support a Vietnamese national football team game[/caption] P: What a fan! Which European league would you say enthralls you the most? M: Each league has its own merits! The English leagues are more physical, with fouls and cautions happening more frequently. It’s also the league where the money is at, given the global coverage it gets. You’ll see more big personalities in football plying their trade here, and the drama off the pitch is almost as exciting as the stories told on it. Spanish and Italian leagues, however, prioritise formations and strategies. Players are given more space to piece together elaborate attacks, which births a more technical style of play. The greatest managers in the world today have come from the Spanish and Italian leagues, and the best players, like Messi, are drawn to stay on and play for them! [caption id="attachment_19991" align="alignnone" width="1024"] 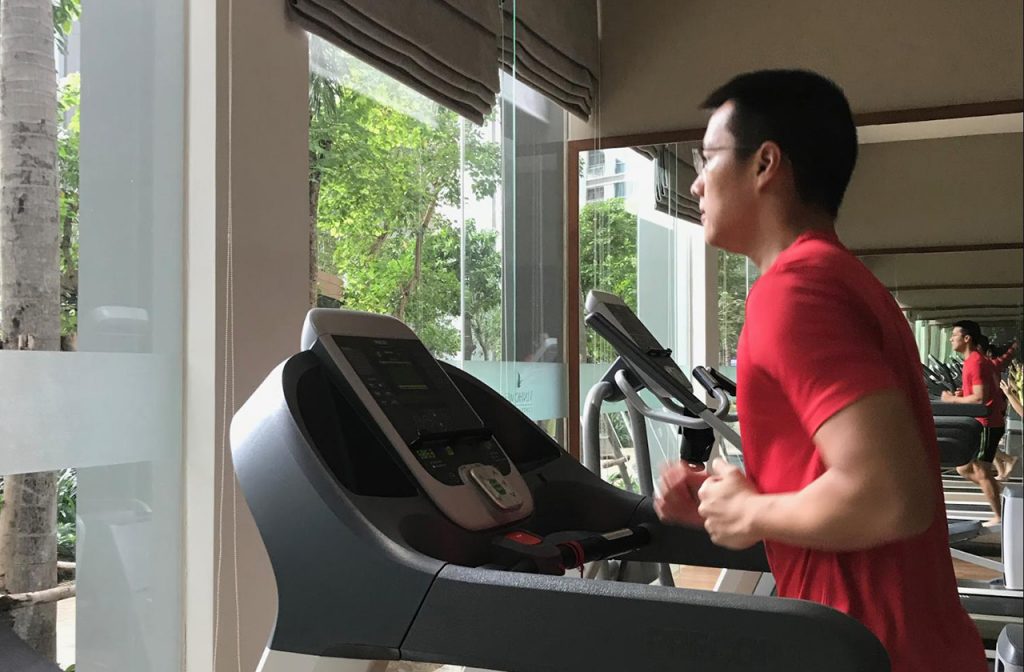 Minh warms up with some cardio before beginning his gym routine[/caption] P: It’s like I’m in the presence of a famous football pundit! (laughs) Outside of football, do you have any other sporting pursuits? M: I wouldn’t consider it a sport, but I do hit the gym regularly. I was a really skinny kid when I first entered university – I weighed in at just about 50kg! Now, I’m at 66kg. Big difference, huh? [caption id="attachment_19992" align="alignnone" width="1024"] 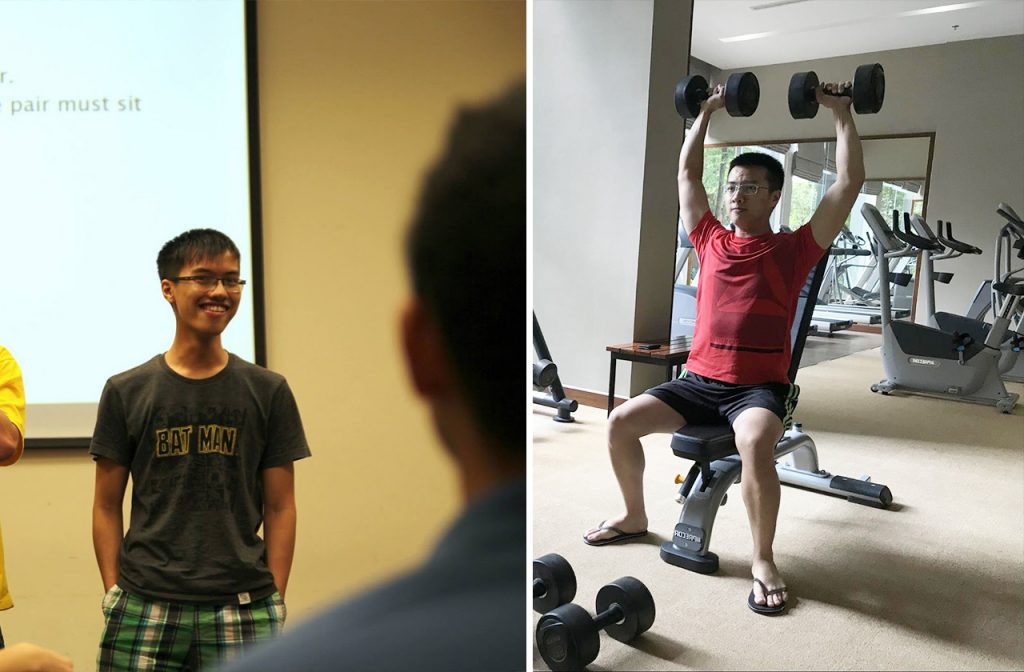 A young Minh before discovering the gym, and a rejuvenated Minh today[/caption] P: Really? I wouldn’t have guessed given your build now! How did this interest begin? M: To be honest, it was my girlfriend who started it! (laughs) She complained that I was too skinny, and wanted me to bulk up. So off to the gym I went, trying to eat and train with little success. It wasn’t till I met a fellow Vietnamese friend in NTU before I started to really get it right. My friend, who was a bodybuilder before he entered university, showed me the ropes – proper form, nutrition, the works. Soon, I achieved my goal of gaining more weight, but by then I was hooked. I started reading up on nutrition and various forms of exercise, and I’ve come a long way since then! It hasn’t been easy keeping up with my fitness regime since I left school. The weekly Shopee Wellness programmes have helped a little, but it would be great if Shopee had an in-house gym! (laughs) [caption id="attachment_19988" align="alignnone" width="1024"] 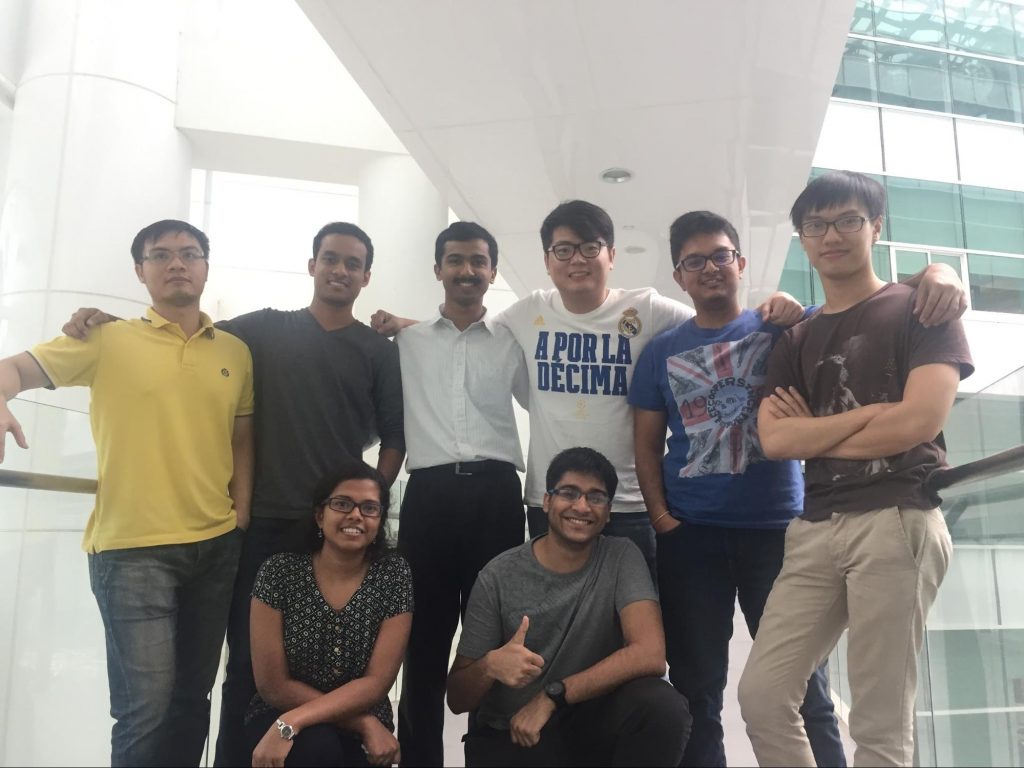 Minh with his colleagues, back at his previous place of employment[/caption] P: We’ll bring this up for you – let’s hope we’ll have even more facilities to enjoy soon! You’ve been part of Singapore’s increasingly talented workforce for the past four years. How is what you’re doing at Shopee different from the tasks you’ve done elsewhere? M: There are quite a few differences. Before starting here, I worked for a B2B Japanese firm as a back-end developer. There, we worked mostly on databases and internal tools, and the nature of the firm meant that what we created never really saw the light of day. Some tools that my team developed were never even released, and watching your work being cast out like that really puts a damper on motivation. Working front-end here at Shopee is the complete opposite – everything you do has tangible effects which can be seen through how consumers interact with it. Some of it is good, some bad – making a difference with each contribution feels more engaging. [caption id="attachment_19993" align="alignnone" width="1024"] 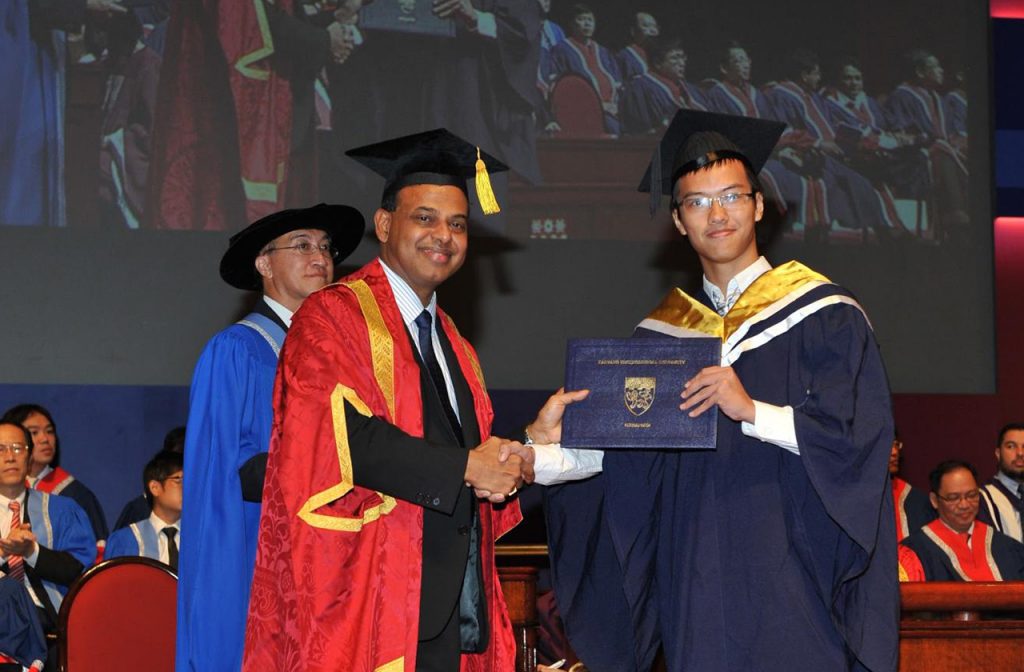 Minh at his graduation ceremony, ending off a fulfilling four years in university[/caption] P: Watching your work make a difference always makes the toil worth it! I’ll leave you to your work now, but to end off, do you have any words of advice for budding developers looking to pursue their studies overseas? M: Yes, please do! If you’re looking to step out of your comfort zone, heading abroad to study will probably be the safest space to experiment and discover your life’s calling. When I was in Vietnam, my parents were there to make sure I was well taken care of. It was only after diving headlong into hall life in NTU that I realized that taking care of yourself isn’t as easy when you’re alone. Of course, Vietnam has a very established STEM (Science, Technology, Engineering and Mathematics) curriculum that’s worth staying on for. However, if the chance beckons, studying and working abroad will give you more than an academic experience. It’ll teach you much about independence, and that’ll help you grow both as a professional, but also as a person.

Thank you Minh for telling us so much about the trials and tribulations of finding yourself abroad! Shopee is chock-full of talent from across the region, and we’re always looking for more. Find out more about our team here, here and here, and find out more about joining us at our Careers page!]]>
Facebook Comments

Slippers, not Shoes: A QA Lone Wolf Takes on the World