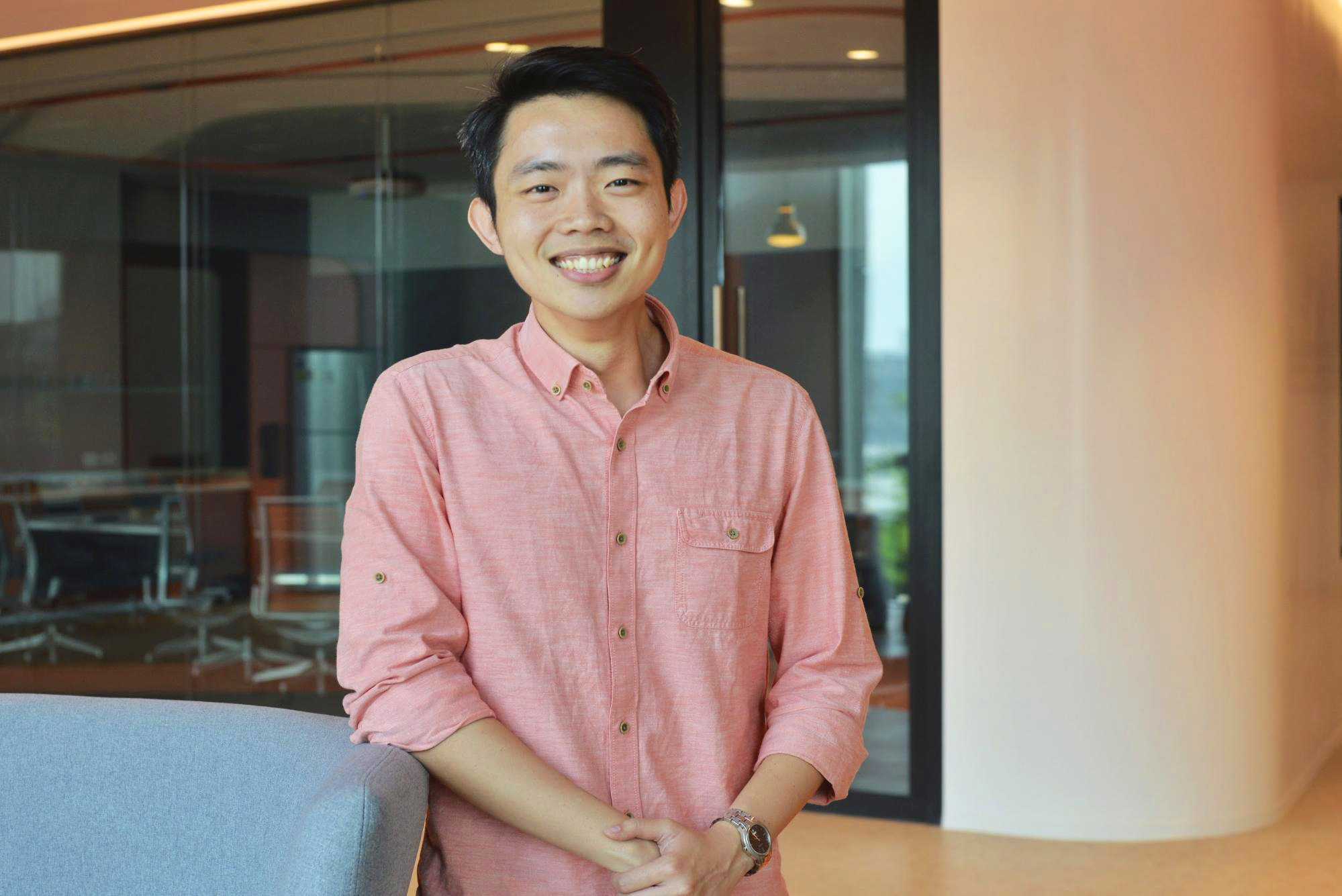 Wun Wei has a palpable positivity about him, one that appears in flashes through his quick and jovial Skype replies. He welcomes my appearance with a bright smile, despite the fact that I had led him to an incorrect location just five minutes ago. As our conversation began, it took no time before I understood his popularity amongst the Shopee community: his infectious laughter and colourful re-enactments of personal experiences make him a joy to be around.

Wun Wei is a Quality Assurance (QA) Specialist with a wealth of experience across the gaming, smartphone, and now, e-commerce industries. His breadth of expertise carries over to his personal life as well – he’s a runner, shuttler, reader, host, and deep thinker, cultivated from years of studying and working away from home up north in Malaysia.

Our hour-long conversation can be found below in full colour!

Perry: Let’s start with what you were introduced as by your anonymous referrers – a host of Shopee’s New Year party!

Wun Wei: I knew someone was going to bring that up! (laughs) Let me explain – Shopee used to have an introductory session for all new hires during Orange Day, our monthly company get-together. We had to talk about something close to our hearts, so I decided to quiz the crowd on darts and just went on and on! (laughs) The HR team thought I was a good speaker, and it didn’t take long for them to come knocking. Before long, I was ‘volunteered’ to host the New Year Party, which turned out to be really fun!

P: Glad you had such a good time! Will we get to see you strutting your stuff again soon?

W: Nope, once is enough for me! (laughs) I’m sure there’s plenty of talent in Shopee, so let’s share the love!

P: Having a flair for hosting must take plenty of people skills. Do you consider yourself a social butterfly?

W: Quite the opposite, actually! I think of myself as an introvert, and I enjoy my alone time as much as I love hanging out with friends. Having the ability to switch things up is something I picked up along the way. It has helped me out plenty of times during my first few months here in Singapore, when I left Malaysia in pursuit of a wider world here.

P: Oh, you’re a Malaysian citizen! You don’t give much of that away – how long has it been since you began your educational journey in Singapore, and what made you do it?

W: I’ve spent seven years in Singapore as a student – 3 years in polytechnic and 4 years in university pursuing a Computer Engineering degree in NTU (Nanyang Technological University). It’s brought me to two IT-related companies before I found my way to Shopee, and I’ve been here since.

Making the decision to study here wasn’t hard, as I was always planning to further my studies away from Labuan, my hometown. Most of my friends wanted to head to Kuala Lumpur, but I felt that moving further south would be an adventure in itself. I was already leaving home – why not go all the way? I decided to give Singapore a shot, and I haven’t regretted my decision one bit.

P: Going against the flow and heading to Singapore alone must have been difficult. How did you manage?

W: It definitely was a challenge! My friends were slightly downcast when I told them about my decision to continue my education away from Malaysia, and did not believe that it would be worth the extra cost. Since I didn’t do my tertiary studies in Malaysia, I’ll never know for sure if my education in Singapore was for better or worse. But what I do know is that the exposure I got to experience, along with the added pressure of being a student in a foreign land, made me who I am as a person today.

P: Hmm, what makes you say that?

W: Take accomodation for instance. Just maintaining my eligibility to stay in the university residences back then took lots of time and effort – participating in the various activities and committees involved several sacrifices, which weren’t exactly the easiest decisions to make.

Add the lack of family and academic struggles to the mix, and you end up growing up very quickly! (laughs) The pressure is no walk in the park, and I’ve seen fellow scholars drop out because of it. Thankfully, with support from my friends in NTU, I got through it.

And just when you think you’re done with the toughest part of life, there’s carving out a career in Singapore’s competitive society. The people that walk through our doors every day are talented beyond belief – I sometimes doubt if I should even be here! (laughs) It’s a challenge to stay relevant with new ideas flowing in every day, but it can done with motivation and belief.

P: You seem at ease with being outside of your comfort zone, dealing with your problems with discipline and poise. Does this apply to your personal pursuits as well?

W: You could say so! (laughs) I’ve been doing marathons as a hobby since two years ago. It started with a 10km run for the Yellow Ribbon Run, which I felt was a good cause to support. That went rather well, so my friends and I decided to take it to the next level – a half-marathon at the 2XU Run a year later. To be completely honest, I wasn’t expecting such a big jump in difficulty. I felt like I lost two limbs that day! (laughs)

We barely managed to finish the half-marathon, but it drove my friends and I to attempt the next level – a full marathon. It’s still a work in progress; we’ve only managed to complete another half-marathon since the 2XU run in 2017.

P: Running any distance does take a lot out of you though! I can barely summon the motivation to get off my couch at times. Do you partake in any other sports?

W: Yes, I do indeed! Shopee’s constantly putting out new forms of exercise as part of its Wellness programmes, and these workshops have been helping with my fitness as I take a break from running. Darts is obviously a sport close to my heart. I also play badminton on a regular basis, both with friends and strangers.

P: Shuttling with strangers? That must be a nerve-wracking experience!

W: It’s not so bad, actually! The sessions are organized on this platform called Meetup.com, which has interest groups for just about every activity! People from all walks of life just show up, play, and socialize. It’s much easier to speak to people when you’re bonding over a common interest, which could be why I keep going back! (laughs)

P: It’s very impressive to see someone who identifies as an introvert meeting so many new people on a regular basis! Now, let’s talk about your introverted side. What’s your go-to activity to get away and recharge?

W: It’s something I’ve grown to enjoy as I get older, but I really enjoy reading! There’s nothing quite like putting everything aside, including all your social media commitments, and sitting down with a good book and your own thoughts. It’s a really low-effort hobby as well, but has plenty of value behind it.

W: It has to be this book titled Radical Candor by Kim Scott. It’s a book on leadership, chock-full of firsthand accounts of managers, their successes, and their failures.

One story really stood out for me – a manager who hired someone who was great on paper, but constantly underachieved. Given the new hire’s credentials, the manager believed that the hire just needed time, and therefore sugarcoated all critiques of his work. Fellow employees were annoyed with what they saw as favoritism, and morale reached an all-time low. The talented new hire was shell-shocked when the manager finally told him about his poor performance. He was so appalled that he was not given criticism in due time, which would have led to personal improvement, that he left the firm less than a year after. The team, affected by the entire event, eventually fell apart as well.

Reading the account was a stark reminder that management isn’t a simple matter of slave-driving or sweet-talking – a balance of both, depending on the people you’re leading, must be struck. The book as a whole also sparked an interest in human behaviour, which I’ve been following up on through the very same hobby!

P: I will definitely keep that in mind, should I lead a team in the future! Whilst we’re on the topic of human behaviour, working for several companies during your time here must have shaped your behaviour for the better as well. Do things get easier as your experiences increase?

W: I think working for an extended period of time does teach you several things that help you deal with situations better. Some of these lessons come with age as well. For instance, working long enough teaches you not to take certain feedback personally, which is a key stumbling block for younger employees who may feel a strong sense of attachment to their jobs (and managers or colleagues).

Experience also changes your perspectives towards work. The idea of work seemed like a burden to me when I first began, but soon, it became a sign of respect and responsibility – managers wouldn’t entrust tasks to you if they didn’t believe you were up to it. Working also now means that you’re part of a project, a mission to build something better.

P: Your positivity and resilience is something we could all learn from! Do you have any more advice for potential Computer Engineering students looking to pursue their studies outside of home?

W: I’d ask them to go for it, but the younger generations are probably already more adventurous and tech-savvy than mine was! (laughs)

The first piece of advice I’d probably reiterate is to be independent. Expecting someone to always have your back only slows you down – you have the potential in you to solve your own problems, whether academic, financial, or mental.

The second point is related to independence as well. Always remember to make your own decisions, for your own benefit. I had friends who constantly questioned my decision to study in Singapore, but here I am – happy, and in my opinion, better off. Going overseas may not work for everyone, but it worked out well for me, at least. It’s your life and your dreams, so go out and chase them on your own terms!

Coming of age is a very personal journey – thank you, Wun Wei, for sharing something so significant with us! We have good people from different countries breaking out and carving a new career out for themselves here at Shopee – read more about them here, here, and here!

7 Things You Might Have Missed from ShopeeFest 2020. Kicking off the New Decade with A Blast!

Comfort First: 9 Best Baby Strollers For Newborns To Snuggle In