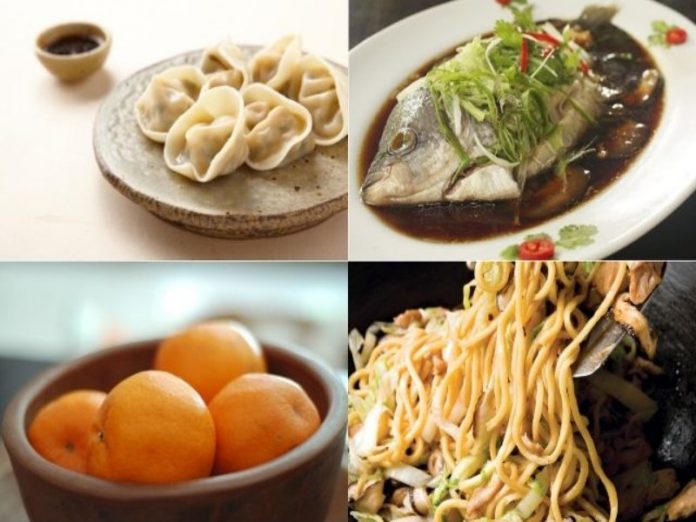 Chinese New Year is all about collecting red packets, visiting relatives, gambling and of course, all Singaporeans’ favourite past-time – feasting. Besides feasting on the usual Chinese New Year snacks, you’ll notice that there’s some lucky CNY food that’s always at every.single.house. These snacks are not just there to fill your tummies or for plain aesthetic purposes, they’re also believed to bring good luck and fortune!

So, with the Chinese New Year preparations in full swing, you might think you’re already prepared for the upcoming celebrations. But, how many of these lucky CNY food have you prepared?

Also known as Sweet Rice Cakes or Glutinous Rice Cakes, these sweet (and sometimes, salty) desserts have a rich history of 1,500 years and were traditionally used for god and ancestral worship. Nowadays, they’re either steamed, fried or boiled, and eaten as a side dish or snack. The Chinese pronunciation of Nian Gao literally means “higher year” and  “increasing prosperity year after year”. By eating this, the Chinese believe that they will be able to achieve greater heights in various areas of their life (e.g. career or studies).

This needs no introduction. Mandarin oranges and tangerines are typically given to the owner of the house you’re visiting. It is also a common fruit eaten during Chinese New Year because it is said to bring good luck, gold and fortune, due to the similar Chinese pronunciation of orange and gold, and tangerine and luck.

Also known as Longevity Noodles, this dish is typically eaten during Chinese New Year, or sometimes even during birthday celebrations of older people. It is said that eating the noodle from the beginning to the end without breaking it, will bring good fortune and that everything will be smooth sailing in the coming year. It is also believed that eating long noodles will bless whoever that’s consuming them with long life. Essentially, the longer the noodle, the longer the lifespan and the better the fortune.

Pretty sure you’ve heard of the phrase “年年有余 (nian nian you yu)”, which literally means to have higher surpluses and bountiful harvests for the coming year. Similar to #1, the Chinese pronunciation of fish is “yu” which also means “surplus and fortune”. By consuming more fish, it is said to increase your abundance and wealth.

Pro Tip: When eating fish during Chinese New Year, do not turn over the fish after you have finished eating one side. In traditional Chinese culture, it is unlucky to do so. Traditionally, the head of the fish should also be placed facing towards elders or important guests.

Did you know that dumplings have a rich history of 1,800 years? These traditionally lucky foods are normally eaten on Chinese New Year’s Eve because it’s Chinese pronunciation “Jiao Zi” literally means the changing of years. On top of this, dumplings are typically shaped like a Chinese gold ingot, symbolising wealth and good fortune.

A hot favourite amongst many Singaporeans, these sweet barbequed jerky is super popular, especially during Chinese New Year. It is typically made of chicken or pork and is marinated with a special secret sauce that tastes oh.so.sinful. Its deep red colour is considered lucky in Chinese tradition, and some shops have even gone to the extent of creating coin-shaped Bak Kwa, symbolising wealth and prosperity.

A must-have during the Chinese New Year season, Yu Sheng or sometimes referred to as Lou Hei is a prosperity platter that is typically made up of slices vegetables, fresh raw fish slices, condiments and dressings. Each ingredient has a special meaning tied to it and is normally added to the platter in a particular order while shouting out auspicious phrases. After the ingredients are added, you’re supposed to toss the salad as high as possible with your friends and family, while (again) shouting out lucky phrases and blessings. It is believed that the higher you toss and the louder you shout, the luckier you’ll be.

Now that you know what kind of lucky CNY food you need to truly prepare for the upcoming celebrations, you’ll need to also nail down on the CNY Ang Bao Rates for this year so you wouldn’t “lose out”.

Do you know of any other lucky CNY food? Share them with us in the comments below, and watch us on ShopeeTV as we try out some of our favourite CNY Snacks!