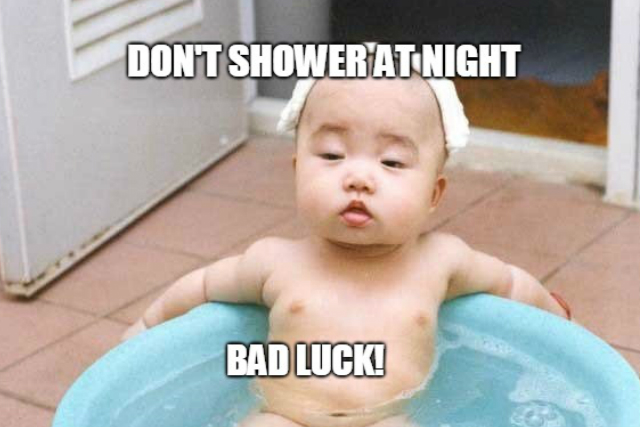 Happy Mother’s Day! On this special day, we’re paying tribute to all mothers with a full list of the weirdest superstitions we’ve heard while growing up in our Singaporean household.

“STOP SHAKING YOUR LEG LAH. Later all your money and luck go away” is just one of the many superstitions our dear mothers have. These superstitions might be weird and illogical, but deep deep down we know that the queen of our households has our interests at heart. And even though we might not be as pantang as them, we still listen and follow these crazy weird superstitions till today, just because sometimes there is a logical reason behind these old wives tales.

Le Mother’s Reason: Clipping nails at night will bring bad luck. The spirits will eat your nails and take on your form and appearance.

The Logical Reason: Households were not as well-lit in the past. Clipping nails at night might be dangerous and you might cut yourself.

Le Mother’s Reason: Showering late at night will cause bad omen to fall upon you.

The Logical Reason: When you shower late at night, there might not be sufficient time for your hair to dry properly before sleeping, increasing the chance of you falling sick. Showering late at night is also bad for joints. Same as #1, households were not as well-lit in the past – You wouldn’t want to fall down in the shower just because you couldn’t see where the step is!

Le Mother’s Reason: When you take a photo of a sleeping person, their soul will be captured by the device, thus leaving their body soul-less.

The Logical Reason: Let’s just say, we’re not the only ones who don’t want our mouth-open-drool-coming-out-and-ugly-bed-hair-photo taken as a memento.

4) “Don’t point your finger at the moon hor”

Le Mother’s Reason: The chinese mythological creature living in the room will take offence at you when you point at it and you will consequently get a cut behind your ears or even worse, have your ears cut off.

The Logical Reason: This is tough but the only logical reason we can think of is that our mothers simply do not want us to stay out late. Similar to how they’re always warning us not to play with the swings past 7pm. It is their eerie way of telling you to “Come back home when it is still bright!”

Le Mother’s Reason: Opening an umbrella indoors will bring you bad luck. Even worse, bringing home an umbrella that is not yours will release unknown evil spirits into your house.

The Logical Reason: Firstly, it is dangerous to open it at home and the sharp edges around the umbrella might injure someone. Secondly, why are you even bringing home someone else’s junk?!

Le Mother’s Reason: If you leave any grains on your plate, your future spouse will be ugly and moh-peng (trans: Hokkien for pimple face).

The Logical Reason: It is our mothers evil ploy to make us not waste our food.

Le Mother’s Reason: It is bad luck to give a clock as a gift because in chinese, clock “钟” is pronounced similarly as death “终”.

The Logical Reason: There are plenty of other gifts out there. Refer to our guide to 12 cool gadgets under $100 that will be on any person’s wish list this year!

8) “Don’t walk under a ladder or bamboo poles”

Le Mother’s Reason: It is bad luck to walk under these things.

The Logical Reason: We don’t know about you, but we don’t want a freak accident and have a heavy ladder or bamboo pole falling on us!

The Logical Reason: It is good manners to sit still, especially for the ladies.

Le Mother’s Reason: You need to inform the spirits that were residing in the hotel room that you are coming in and staying there for a period of time.

The Logical Reason: The housekeeping team might still be inside the room. You wouldn’t want to be caught in an awkward moment, right?

Le Mother’s Reason: The moth is the spirit of your recently departed ah gong, or relative.

The Logical Reason: Some moths have a powder-like substance that can cause rashes if you come in contact with it. Better to be on the safe side and not kill it with your bare hands!

Le Mother’s Reason: When you whistle, you will attract the unwanted attention of the evil spirits.

The Logical Reason: It is annoyingly noisy and a bad habit to whistle, especially at night!

What other superstitions have you heard of before? Let us know in the comments below!

11 Telegram Games & Bots That Will Revive Your Group Chats