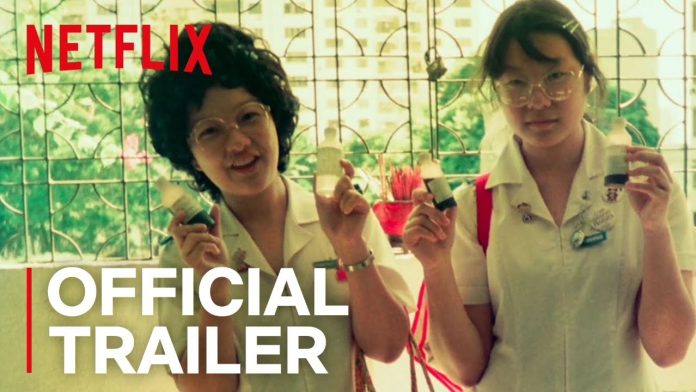 We’re starting the list of best documentaries on Netflix Singapore with a local production because, #SGPride. Shirkers is a 16mm film written and starred in by Singaporean Sandi Tan — also the author of the novel, The Black Isle. However, before the feature is completed director Georges Cardonna suddenly disappears with the footage. Several years later, when the clips made their way back to Sandi, she knew she had to continue the tale. Shirkers is interwoven with interviews with the original cast and snippets of the lost footage and is Tan’s attempt at reconciling with the mysterious event that shadowed her past.

Oscar-winning Netflix documentary, Period. End Of Sentence., highlights the stigmatisation of menstruation in rural India and the dire need to start a conversation about it. The documentary follows The Pad Project, a US-based NGO, that educates and equips women with an easy-to-use pad machine so they can make and sell pads. This spurs a micro-economy within villages where women start to earn income, independence and the ability to further their dreams. If you’ve only got half an hour to spare, this is the best documentary on Netflix to watch!

3. Get Me Roger Stone

With the never-ending drama surrounding Donald Trump, Get Me Roger Stone is one of the best documentaries on Netflix for a zeroed-in look on his closest allies and how they worked. Lobbyist, political consultant and campaigner, Roger Stone is infamous for having a hand in about every scandal that has rocked the country’s political landscape — including the 1972 Watergate affair. Although effective at what he does, he has used nefarious ways and dirty tricks to lead presidency campaigns. Also, did we mention Trump fired Stone in August of 2018? Yup, this is one messy relationship.

Follow the seven-part docuseries, The Keepers to learn about the compelling turn of events that led to Sister Cathy Cesnik’s murder in 1969. You’ll get entangled in tales of sexual abuse at the Catholic school she was a teacher at and subsequent indifference of the relevant authorities to evidence. If you’re a crime junkie then this is one of the best documentaries to watch on Netflix Singapore. We also appreciate that even though the killer was never convicted, the documentary does good of not following a predisposed narrative — leaving you pondering on the events long after the series ends.

Spanning over eight episodes, discover the animals and creatures roaming Earth’s frozen worlds, jungles, seas, deserts and grasslands. If you’re often looking for things to do with your little ones, Our Planet is one of the best nature documentaries to watch with your family on Netflix Singapore. With fantastic visuals and narrated by none other than the OG Sir David Attenborough, find a new appreciation of the great wilderness of our planet from your couch. Perhaps start with one episode this weekend?

Ever heard about the Volkswagen emissions scandal? Well, now you can watch it. If you believe the world is all sunshine and rainbows, Dirty Money is one of the best documentaries on Netflix for a reality check. You’ll be exposed to corruption and greed in large-scale companies through first-hand accounts of perpetrators and victims alike. Expect episodes that uncover Volkswagen cheating on emission tests to one on HSBC ties with Mexico’s deadliest cartels.

7. Life In The Doghouse

Doing a 180 from Dirty Money, is the light-hearted and poignant, Life In The Doghouse. Meet Ron Danta and Danny Robertshaw, a gay couple who rescue dogs and run a dog shelter from their very own home! Till date, they’ve rescued 10,000 dogs from overcrowded shelters, abusive puppy mills and dog fighting rings. At one point, the documentary cuts from dogs frolicking on the couple’s estate to a frame showing euthanized dogs getting packed off in black trash bags. Although the reality of that takes a while to sink in, it’s their love and devotion to the mutts that tug at your heart. Needless to say this is one of the best documentaries on Netflix, especially for animal lovers.

Music fans will be delighted with Homecoming, exclusively produced, directed and conceptualised by Beyonce. Following her headlining performance at Coachella in 2018, you’ll be left mesmerised with Queen B’s energy and zeal. Get a glimpse into the world of logistical preparations of a music concert and behind-the-scenes of what it takes to be a star of Beyonce’s magnitude. But of course what’s a Beyonce show without her chart-topping hits? If you’re in the mood to belt out to tunes and bust some moves, this is the best documentary on Netflix Singapore to do just that!

In 2017, several A-List models and influencers were promised a grand music festival event at The Bahamas. Instead, they were met with dismal accommodations, styrofoam-box meals and an island not ready to host an event of any scale. Watch how the Fyre Music Festival fell flat on its face despite the hype leading up to it. This documentary essentially puts the spotlight on the agency of influencer marketing and questions when is it just too much.

Do you believe in the existence of UFOs? Bob Lazar is one of the few proponents of UFO existence in Area 51, a remote detachment in Nevada. In this interview-style documentary, his friends, wife and UFO adherent George Knapp vouch for Bob. But without proof of him ever having worked with extraterrestrial aircraft as he so claims, you’ll start taking what he says with a pinch of salt. If you’re a UFO enthusiast or enjoy following space-related conspiracy theories, then this is the best documentary to sink into on Netflix Singapore.

How many of us wish we had a better memory — especially during exams? Memory Games follows the lives of four memory athletes as they share memory techniques and insights. Watch them memorise 200 names in 15 minutes or reconstruct a pack of 52 cards they just saw under 5 minutes. At the end of this, you’ll be testing your own brain capacities too.

But our list of best documentaries on Netflix Singapore doesn’t end here. If you love to travel, then check out funny man Conan O’Brien’s Conan Without Borders. Meanwhile, sports lovers should watch Icarus, a doping scandal or follow four women as they row from San Francisco to Australia in Losing Sight Of Shore.
Not too inspired with documentaries on Netflix Singapore? Then use this Netflix hack to unlock a host of secret categories and discover even more content. Or binge on these Netflix Asian dramas including must-watch Indian, Korean and Thai options. After all, there’s no such thing as too much Netflix.